The Morning Bulletin Newspaper, Queensland
Aussie Wellness Women Cookbook - From Our Kitchen To Yours 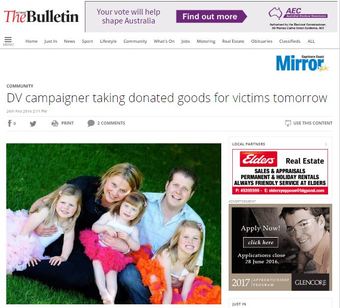 ​A toothbrush, shampoo and soap can make a world of difference to a woman in need when suffering from domestic violence.

And that's what Yeppoon online wellness expert and founder of Eat and 3 Veg, Anita Rossiter will be asking for from her local community this weekend, to help tackle domestic violence as part of a nationwide campaign by the online wellness community.

More than 40 of Australia's leading wellness experts, including Jo Whitton of Quirky Cooking and Tenina Holder of Cooking with Tenina, have banded together to produce an online charity e-cookbook to raise funds for the Luke Batty Foundation...

ABC Radio Northern Tasmania
I have had the pleasure of chatting with Helen Shield on ABC Northern Tasmania a couple of times now.  We discussed our tour of Tasmania in April 2015 to promote "Sandwich Free Packet Free Lunchboxes" and spoke about the importance of nutrition in our children's development.  We also talked about how and where to start with packing a helpful and energy sustaining lunchbox to see ourselves and our kids through the day.  Helen had previously requested an interview with me earlier in 2015, seeking my opinion on the findings of a study into fish oil supplements, which was published in The Guardian on 22 January 2015.

Secret Mum's Business Podcast
Podcaster, Naturopath, author and TV presenter Angela Counsel contacted me and requested an interview for her popular podcast in March 2015 "Secret Mums Business."  Angela has been featured in several magazines and television programs including Prevention, Good Health, Channel 7’s The Morning Show and Channel 10’s The Project. She is also is a regular contributor to Working Mums Masterclass Magazine, The Mummy Mag, Family Capers and Mouths of Mums.  Check out her popular blog, "Shower Secrets" and listen to her amazing podcast!
Green Zebra Blog
Hobart based health and fitness advocate, Rhys, has a really clean and inspiring website, called Green Zebra.  He has a fantastic facebook page too, and he often features products, recipes and even offers a free "Healthy Living Cookbook" downloadable from his website.  Check out my interview with Rhys, and follow him on facebook! 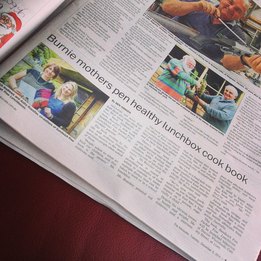 The Advocate Newspaper, North West Tasmania
The launch of our popular cookbook "Sandwich Free, Packet Free Lunchboxes" was held at Burnie Wholefoods in Cattley Street at 11:00am on Tuesday 9 December.  My dear friend and co-author, Michline Andrews and I were on hand to personally sign copies of our book and we were overwhelmed with the response.  The book continues to inspire people and we love hearing about the impact that the book is having on our community!  Check out our facebook page for more info about the cookbook or order your copy online here.  The much anticipated launch of our cookbook had attracted so much attention, that we were even featured in the Advocate Newspaper, and the day was a huge success! 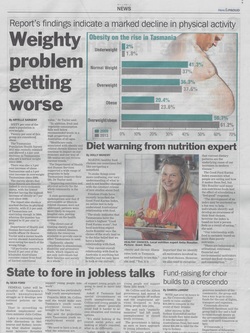 60% of Tasmania's population is overweight - how scary is this statistic?  I believe that our relationship with food needs to change. 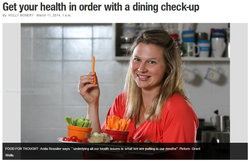 This interview was given just before my first ever, and completely "sold-out" public seminar, held together with Gary Fettke in March 2014.

Check out my "10 Questions" interview here. 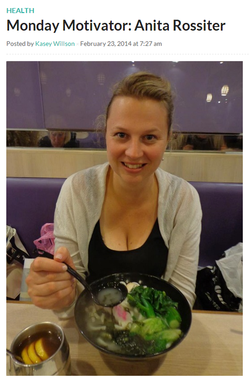 My Health, My Happiness with Kasey Wilson, ND
I was featured on Kasey Wilson's website as her "Monday Motivator."

Kasey has a great website called myhealthmyhappiness and I urge you to check out her site.

She is an inspiration, and I'm sure you'll find her blog and recipes worth a peek!

Check out my article here.